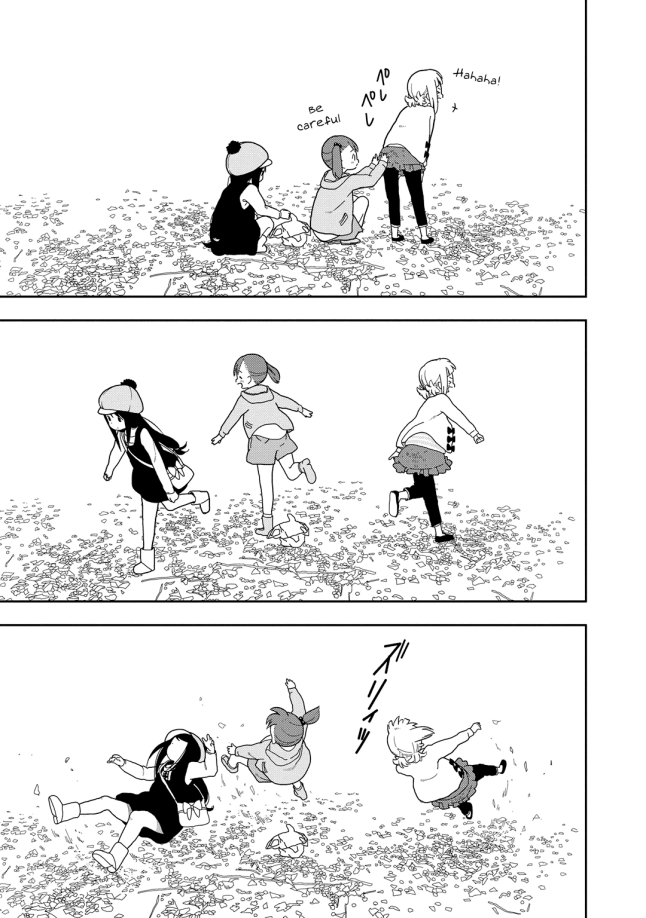 Mitsuboshi Colors (三ツ星カラーズ, lit. Three Star Colors) is a slice of life manga by author Katsuwo (カツヲ) that I truly love, but let me tell ya, I don’t think saying why will make for a particularly long review. This is a simple manga with simple merits that take little time to explain. It is not like Katsuwo’s other manga I reviewed, Hitoribocchi no OO Seikatsu (Addendum), which I like for entirely different reasons really. Instead, if you’ve ever read or watched Ichigo Mashimaro, then that is akin to what you can expect from this series. That is to say, it’s an iyashikei/healing slice of life comedy about realistically childish kids being kids (both adorable/funny and also a little cruel). I might argue for it being the pinnacle of slice of life comedy, at risk of people throwing things at me. Its simplicity is its strength.

Mitsuboshi Colors wastes no time explaining itself. You must gather the premise on your own, and that premise is simple to grasp. 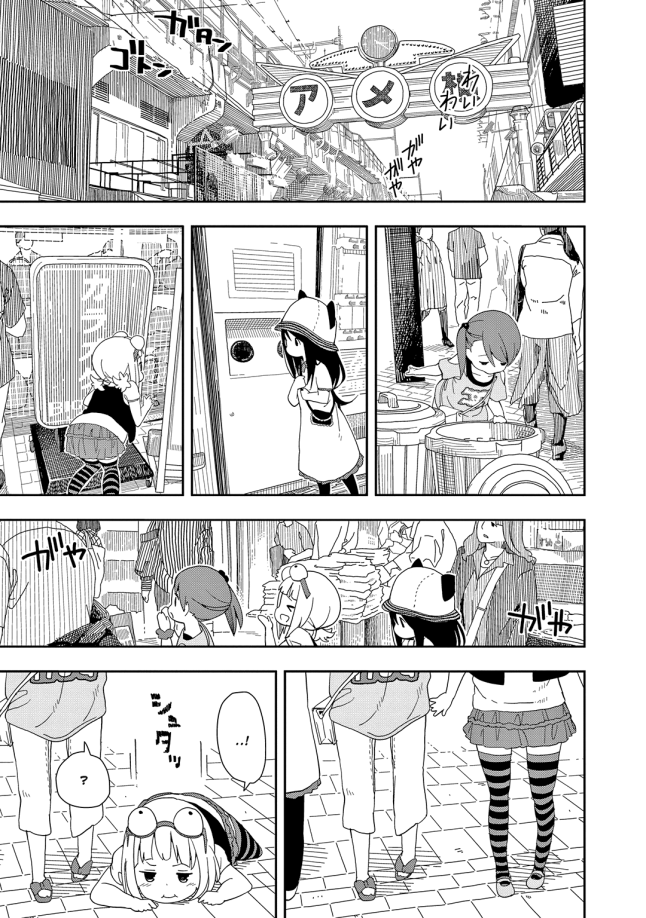 To expound just a little, these three girls are Yui (the captain and the one bringing up the emergency), Sacchan (the girl with funny glasses, “poop”), and Kotoha (the girl with a DS who doesn’t say much). They are the “Colors”, a trio who “protects the town” (the town being the city of Ueno, two stations away from Akihabara), but protecting the town usually involves playing games of pretend or doing things very, very tangentially related to being heroic. Otherwise, they hold meetings about things or hang out. 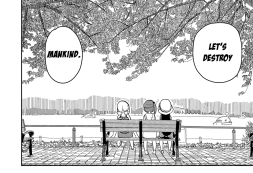 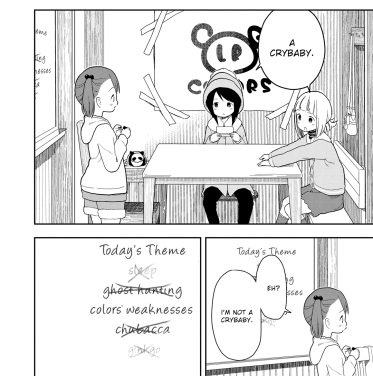 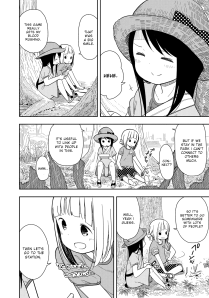 The memories of me sitting outside with a pal and tugging out grass are countless.

Actually yeah, speaking of memories, with the true-to-life portrayals of kids and the backgrounds straight out of reality, this series quite easily evokes nostalgia. The series is also removed from reality juuust enough that we can get absurdity — fuel for comedy. The Colors have a logo, for goodness sake.

The basics of each chapter are “the kids are gonna do something pretty dumb”, “the kids say some ridiculous things”, and “puns”.

Yui seems like the “weak” sort of character, but is the leader of the Colors, and actually demonstrates that well on occasion. 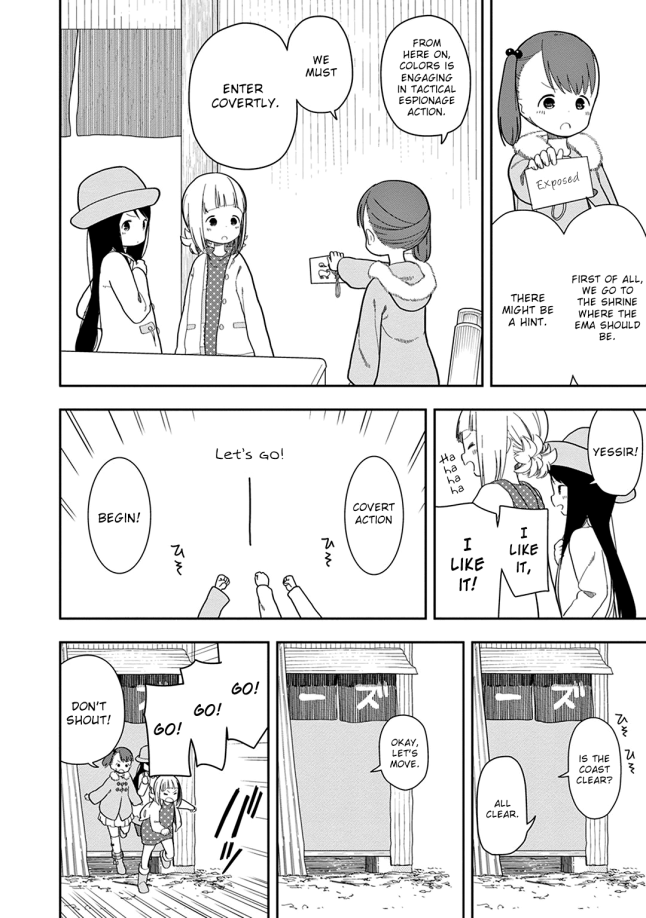 Sacchan is absurd. She says some…let’s call them “deep” things on occasion. 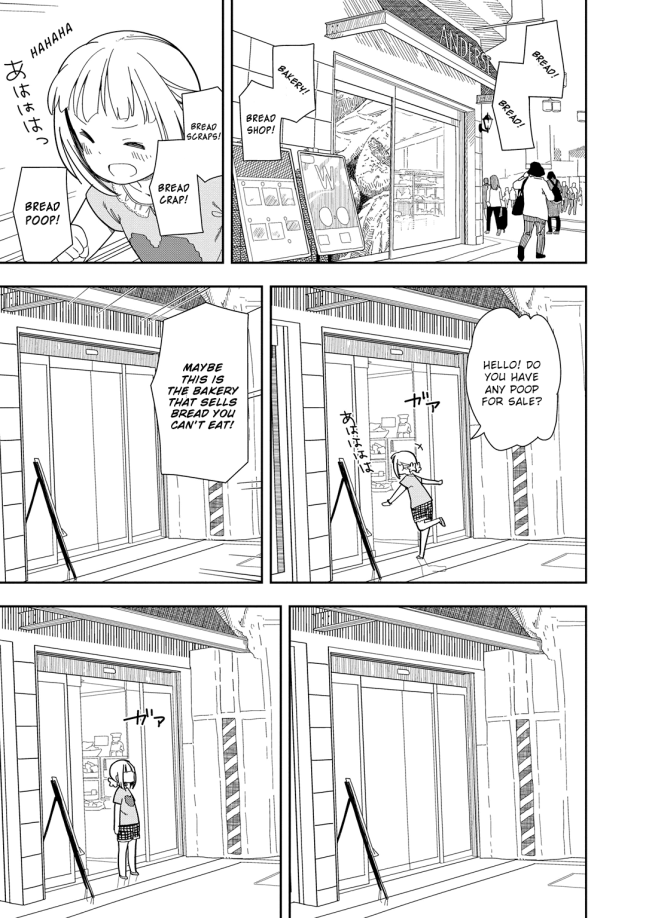 Kotoha seems like the “dark” sort of character, and she is, but in the end she’s as silly as the rest. More than occasionally, she says something horrifying, or demonstrates sadism. 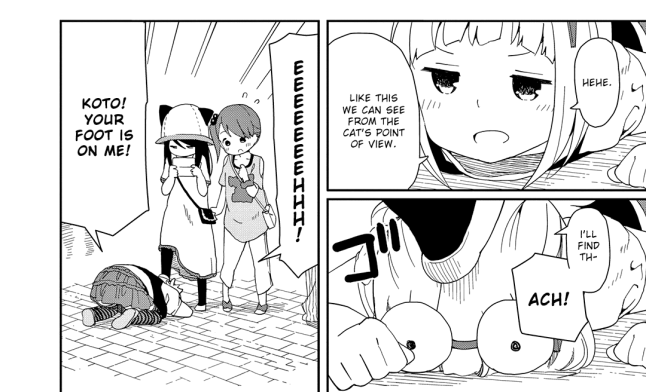 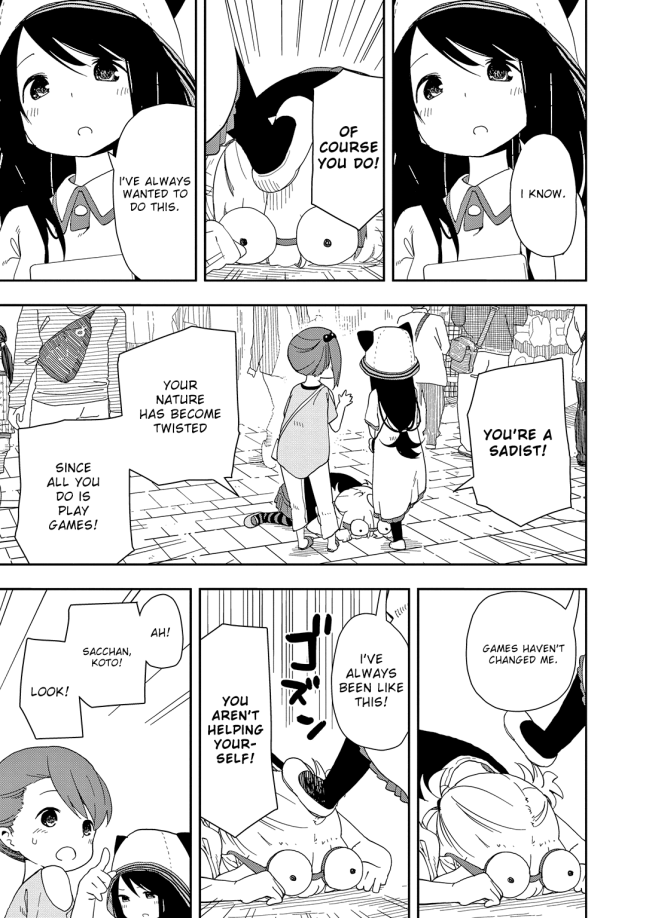 And there you have it for our main characters.

There are several other minor characters; usually adults that the Colors interact with (either regularly or randomly). There aren’t any other kids in the manga to date, but that’s fine. The dynamics of the trio + adults works extremely well. Two adults in particular stand out as side characters.

One is Saitou, the eternal enemy of the Colors. Saitou is a police officer who has no patience for the kids’ silliness. He chastises or plays tricks on them regularly. In return, they torment and tease him.

Another is the old man. I don’t believe he’s even been given a name. The old man is an enabler for the Colors, regularly entertaining them and coming up with little games and puzzles for them to play through. They don’t always appreciate the prizes, the little brats, but the old man definitely has their respect.

Lastly to mention, there is a thieving cat that looks like a panda (and their logo) that the Colors catch in chapter 1 and take in to their clubhouse. They name him Colonel Monochrome, and he occasionally sets them off on an adventure based on the things he steals.

That is about all I can say about this manga. It’s a carefree, relaxing, extremely funny series. It doesn’t really fall into the usual archetypes or tropes, I feel, making the series overall fresh, and without things like yuribait or school antics you immediately get the impression that Mitsoboshi Colors is nonstandard. Read it; I can’t see why you wouldn’t like it! Also, between Katsuwo’s three ongoing manga (this, Hitoribocchi no OO Seikatsu, and Kin no Tamago), I think this is the manga of his that “looks” best. Not only is it unrestricted by a yonkoma format, it has lots of nice looking backgrounds, the characters look great, and everyone wears many different outfits that look cute! Good goddamn stuff, two big thumbs up. It is everything I expected and more.

Also, massive amounts of respect to the scanlators contending with the absurd amount of Japanese puns in this series. They translate them well into English.

A short review. What else do you want from me?

Thanks for reading, see you next time.