Hey, it’s been a while since the last article. The honest reason is that while I did read manga, I couldn’t find a set of three that I wanted to review, and time dragged on while I read… But ultimately, I found three that I figured I should discuss. One of them is this.

Remember Chimoguri Ringo to Kingyobachi Otoko? Maybe you don’t, but one year ago it was among the first three manga I wrote about. So, I guess this is a celebration! Yay, one year anniversary! Anyway, this is another series by the same author, Abe Youichi (阿部洋一). It’s called Daidai wa, Hantoumei ni Nidonesuru (橙は、半透明に二度寝する) and as far as I know, the best way to translate this title is Daidai, Translucent it Goes Back to Sleep. Note: “Daidai” seems to be the name of the manga’s setting, a town. It could also be “The Bitter Orange”, but that makes a lot less sense.

This will likely be my shortest review because this series is very small and very reliant on ignoring your expectations. Basically, if you like Chimoguri Ringo, Hoshi no Ponko to Toufuya Reiko, Nickelodeon, and/or Sora ga Haiiro Dakara, you will like Daidai wa, Hantoumei ni Nidonesuru. Also if you like Dowman Sayman, who seems similar to Abe Youichi. This is a surreal black comedy tragedy featuring a small town which we see through interconnected one shots. It has amazing art and is very weird and there’s a lot of focus on water/the sea/ocean life. Interested?

That is a disembodied head, yes.

The series takes place in some town. The first chapter is about a girl who murders and decapitates her best friend because said friend suddenly started being mean and cold. Don’t worry, they make up.

The closest thing to a plot is that a homeless young girl wanderer is killing alien invaders that look exactly like fish. Or, she says they’re alien invaders. Nobody believes her, but she continues to fight.

Also, there’s this cop who’s sick and tired of the kids in his town. They keep doing dumb stuff and getting into trouble or danger and they pretend the town is weird and man, he sure can’t stand it.

There’s no reason to believe the town is strange.

So basically, highly recommended, one of my favorites. Daidai wa, Hantoumei ni Nidonesuru is an incredibly good, incredibly unique series full of wonderful and more than occasionally sad things. It can be pretty funny or tragic, and every story inside its two volumes is good. Probably the greatest thing about it, and Abe Youichi’s manga in general, is about how just about any single page of it could sell it. Chimoguri is the same way. The translation is complete, and…woof that final chapter. Anyway, it’s great stuff. 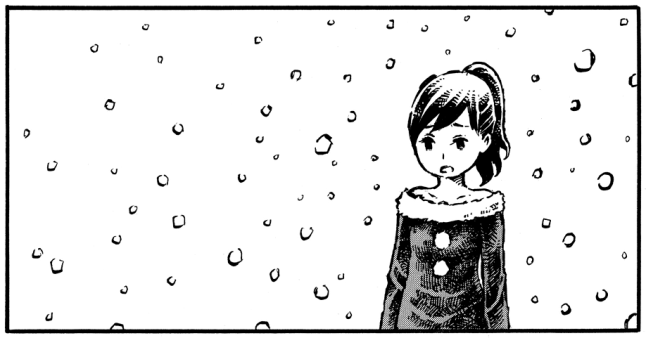 Your most likely expression while reading this manga.

Thanks for reading! Next time, a yuri manga? It’s yuri, right?