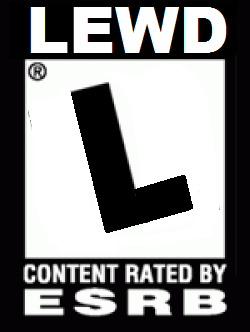 The following content is somewhat lewd. Those pure of heart, take care.

Keijo!!!!!!!! (競女！！！！！！！！, Hip Whip Girl) is a sports/comedy manga by Sorayomi Daichi (空詠大智) that is, against all odds, pretty good. As this first image indicates, this series has a focus on butts, so it should come as no surprise that there is fanservice here. You will get butts and you will get boobs — sometimes boobs with nipples exposed — but I’ll be completely honest: this series isn’t really arousing, it’s mostly just hilarious. This is a manga about a pool-based gambling sport where girls in swimsuits attack with their breasts and asses to knock one another to the floor or into water. It is replete with sports cliches, crazy manga “superpowers”, and hotblooded action. I was very amused and entertained by Keijo, though I’ll admit I expected to like it. 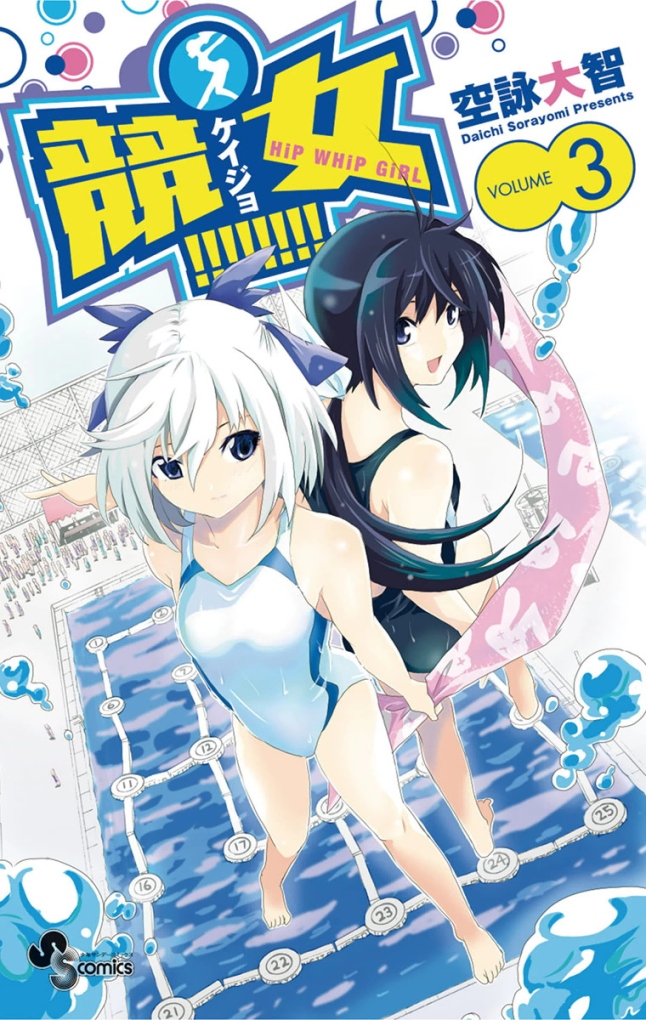 Keijo tells the story of Kaminashi Nozomi, a senior in high school close to graduation. In terms of shounen manga protagonists, she’s fairly standard. She’s optimistic, friendly, and she has a dream. She has a strong talent for gymnastics, and her teacher and classmates want her to head into the Olympics with the skills she possesses, but this is not her dream. We see that Nozomi has a bit of a bad personality with her reasons why that is, however. Being an Olympian is risky and not terribly lucrative, so she’s got no interest in it. Instead…

Her dream is to become a keijo player.

Keijo is a fictional sport created by Sorayomi-sensei exclusively for this series. At the start, all we know is that there’s a lot of money in it (this is what Nozomi really wants) and that it’s a sport that was legalized for gambling a decade ago. Nozomi’s teacher isn’t sure she knows what she’s really getting into, and so he requests that she come with him to watch a game of keijo (called a “race”) to see how it is. She agrees and joins him the day after along with her childhood friend, Omotenishi Taichi. They enter the stadium, and we see this magical sport for the first time.

And a boob sport.

Using only the butt and the boobs, girls employ techniques and athletic skill to defeat their opponents. We quickly learn that the sport is dangerous, even more so than sports Nozomi had dismissed before. There are a number of deaths every year from keijo races; drowning, concussions, and so on are real and present dangers from playing it. It isn’t a sport for the weak; this is what Nozomi’s teacher wants her to understand. So long as she does, he encourages her goals. We get a heartwarming moment between teacher and student, but before Nozomi can triumphantly declare that she will one day stand atop the world of keijo, Taichi objects.

Tensions rise and Nozomi’s teacher breaks them up, telling them that it might be best to settle this on the land (what a keijo playing field is called). After we see why her teacher is so knowledgeable about this sport, Nozomi and Taichi get into a pool for a mock race with a combination of men and women. Taichi believes keijo is a strength-based sport and Nozomi is unsuited for it. He says he’ll show her there, but she shows him the truth of it instead.

This T&A sport isn’t that simple!

Strength, speed, stamina, the presence of other players, and the land itself are all contributing factors to victory. It seems the mangaka didn’t just make this series as an excuse for fanservice: keijo is a true sports manga. It takes some fundamentals from the sport of boxing, and the series itself has references to Hajime no Ippo.

The first chapter isn’t over after Taichi falls, however. The rival appears, because every sports manga needs at least one rival, and she quickly disposes of the other two players. She’s skilled, managing to push Nozomi back with ease. However, before this girl can triumph, Nozomi bends down low and flips her up with her ass.

The girl is flung from the land and Nozomi wins. Shocked by this skill, the girl — Miyata Sayaka — requests Nozomi’s name. Not long after this, the two accept one another as friendly rivals.

And that’s all for setup. Interestingly, Keijo doesn’t immediately go into the titular sport. In fact, it takes quite a while for a somewhat serious race to happen and even longer for a race with some kind of stake in it to take place. As of chapter 80, most of the series has instead focused on training while the cast learns professional keijo play at a trade school (and quite a bit of it focused on just getting into that school). I think this is a very good thing for a number of reasons.

As totally realistic as keijo is, it is still a made up sport. Therefore, it needs a lot of explaining in order to be acceptable. Slowly, but surely, the manga introduces us to the fundamentals of keijo, and against all odds a lot of it starts making sense. Old things learned come back later to explain how a move is executed, training comes into play when in races, and techniques or specialties are brought back and expanded on later in genuinely interesting ways. For instance, a practice of passing a volleyball to one another on a windy shore with your butts comes into play in a superb way later when one player comes to face the best in her school.

When a match starts, it’s a combination of intensity and hilarity, the prior training and developments culminating in a splendid show with some in-race twists.

The sport of keijo has no right being as cool as it occasionally is, although admittedly most of the time it’s so absurd and ridiculous that it will just make you laugh. The things these girls can do with their hips, butts, and boobs are incredible. The “lands” are also insanely varied, which is hinted at when we see a basic circle for a land, a rope lattice, and a dome — the possibilities are really pretty much endless which makes for some honestly cool set pieces and tricks. Teamwork also plays a factor in an interesting way (usually, teams are formed impromptu for a race). Furthermore the characters tend to take everything done on these lands completely seriously, not wondering about the stupidity of it all, and that only makes everything funnier/more…badass.

And on that note, this cast is pretty nice.

Bear witness to the best character in the series.

Since it’s a sports series, naturally Keijo has quite a few characters aside from the protagonist and her rival. The two of them are good, thankfully, and not grating, but the other characters are great as well. Development does not only come to the main pair, but also the many side characters. I consider the absolute best example of these to be Aoba Kazane, pictured above. I won’t say exactly why, but I really enjoy whenever we get focus on her. Her storyline is awesome.

Regarding the main characters, the more interesting between Nozomi and Miyata is the latter. Nozomi is simple: an excitable, driven girl whose family is rather poor and thus she dreams of riches. This works and is fine, since her simplicity disarms the more complicated characters. Miyata is one such character, and she has some intriguing baggage to her. She’s an ex-judoka who was a favorite to take the gold at the Olympics as Japan’s representative, but now she’s playing keijo. Keijo draws many kinds due to how much money can be made from it and the various styles of play, so quite a bit of the cast came to the sport from other ones. This way, Keijo has a little bit of everything from other sports (used in some creative and fun ways), which is nice.

Miyata is particularly good for her past life as a contrast to Nozomi who is an unknown newcomer. Miyata is also a stubborn sort of quiet girl, another way that makes her Nozomi’s opposite. She’s not exactly a standard rival, and is a good friend to the protagonist almost from the start (though they do have some bumps at first). There are a lot of good friends in the manga, which makes things pleasant and lighthearted, but Miyata is definitely Nozomi’s best friend. I like her, and I also like yuri.

Regarding the art, it’s…acceptable. Sometimes, it’s really rather good, but mostly I would just call it decent. I think that’s fine, since if this series was well-drawn the lewdness might distract from the coolness and comedy. With an arstyle like this, the series can feel like it’s more about the laughs and the exciting sports action than about pretty ladies being pretty (and actually, there are a number of characters who aren’t “pretty girls” and are still good players, so that’s nice). If I had to summarize, I’d say Keijo is definitely a sports series, and a good one.

And honestly? I think I want to end the review around here.

Keijo is a series that has quite a few surprises and I don’t really want to spoil them. The events, training, tests, and races almost always do something so absurd that that alone is a draw. I don’t want to dampen that stuff, so if this at all interested you go on and read it yourself! If you read up to this point, you know whether or not this is your kind of manga.

Keijo is getting an anime and honestly I can’t wait for it. It’s going to be really fun seeing some of this stuff animated, though I’m a little disappointed knowing the latest chapters (which have some of the best stuff) probably won’t be animated for a while if ever (they were; the anime was really good). Check out the PVs:

I, for one, am very excited.

You can import Keijo‘s tankoubon from CDJapan, honto (guide), or ebookjapan and perhaps shamelessly display them on your bookshelf. Be proud!

Thank you for reading. Next time: a manga about a real sport.