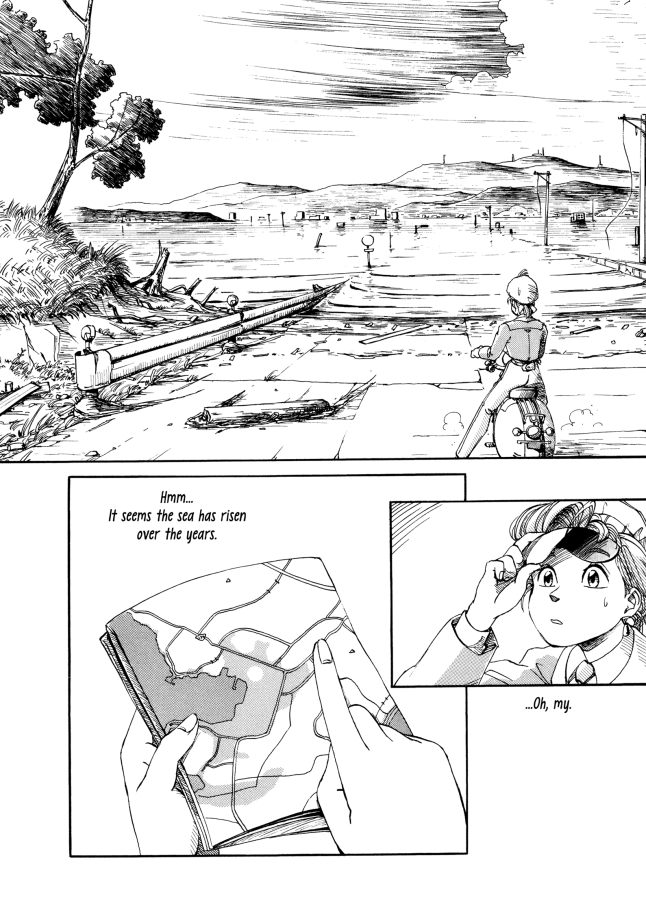 Yokohama Kaidashi Kikou (ヨコハマ買い出し紀行, Record of a Yokohama Shopping Trip, most commonly known as YKK) is the manga I’ve seen most commonly referred to as the absolute best out there, and if not the best out there the best slice of life manga out there (with a strong element of iyashikei/healing). It is an award-winning post-apocalyptic science fiction series created by Ashinano Hitoshi (芦奈野ひとし) and the title, as far as I can tell, has little to do with the content. It began as a one-shot, a one-shot which became the prologue chapter with a title that makes sense, but only for that chapter. Anyway, I finally read it because it’s an ooold series that ran from 1994 to 2006 and I’ve naturally been hearing about it for a long while. The greatest manga of all time, huh? …Yeah, yeah I see why. This manga is astoundingly good; comparing it to others is pretty unfair. It’s stupidly good — on another level. It reminds me of acclaimed literature I’ve read, only it’s a comic. Quiet, beautiful, smart, mysterious, cute, somber, meticulously paced, full of surprises, and yet almost always relaxed; Yokohama Kaidashi Kikou is, in fact, probably the greatest manga ever made. 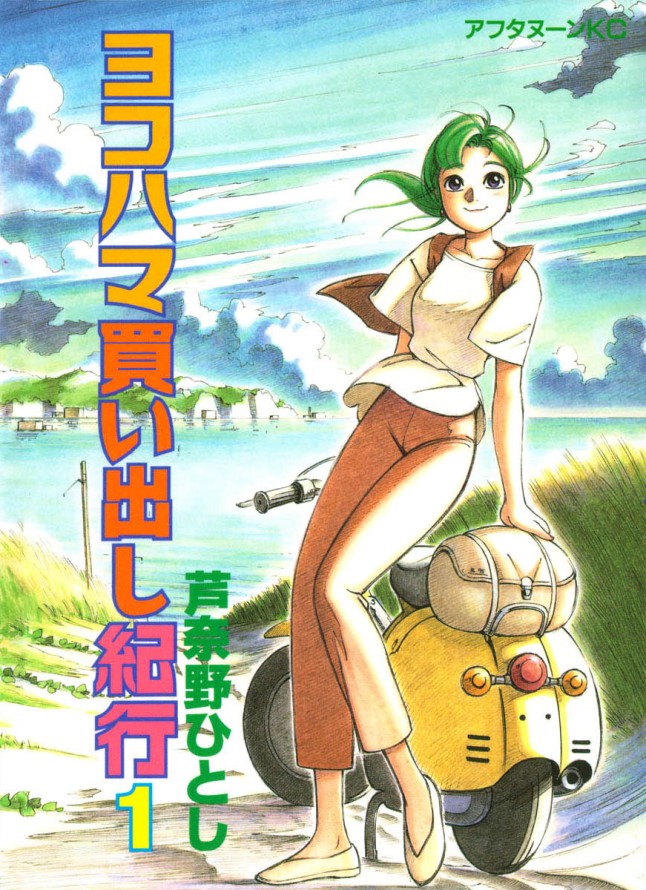 The human race and its mark on Earth are fading, in the last years of humanity we follow a robot named Alpha who works in the countryside at a small coffee shop which is named after her. Cafe Alpha gets very few customers, most of whom are just the locals, but Alpha is a cheerful sort who cherishes moments she has with others and manages to take up time on slow days anyway, usually by traveling around a bit on her scooter. Although she is cheerful, she isn’t a “simple” character and there’s quite a lot of depth to her. On that note, although she’s a robot, Alpha seems incredibly human and only has a few strange quirks. The question of why that is is one of the series’ great mysteries.

Well regardless, Alpha is CUTE! CUUUUUTE!

The series is episodic but features chronological progression, recurring characters growing older and/or leaving the area, land deteriorating, and so on. Also due to the episodic nature I’d qualify this series as one with multiple protagonists: although Alpha appears in nearly every chapter (even if it’s only at the start or end), sometimes other characters take up narrative focus and we follow them for an episode.

It’s really generalizing, but aside from these side trips to other characters’ perspectives, you could break up the chapter “types” into “Alpha is alone at home” chapters, “Alpha explores” chapters, and “Alpha chats with a person or persons” chapters. Any of these can range from charming and humorous to “silent” and/or heart-wrenching. The manga is very subtle, though, so any sadness doesn’t overwhelm you and what things it has to say aren’t smashed over your head. Actually, I was brought to tears by this series; near the end when you see [this] (not a spoiler — if you’ve read this you might recognize it). Everything kind of hit me all at once, then, and I cried. 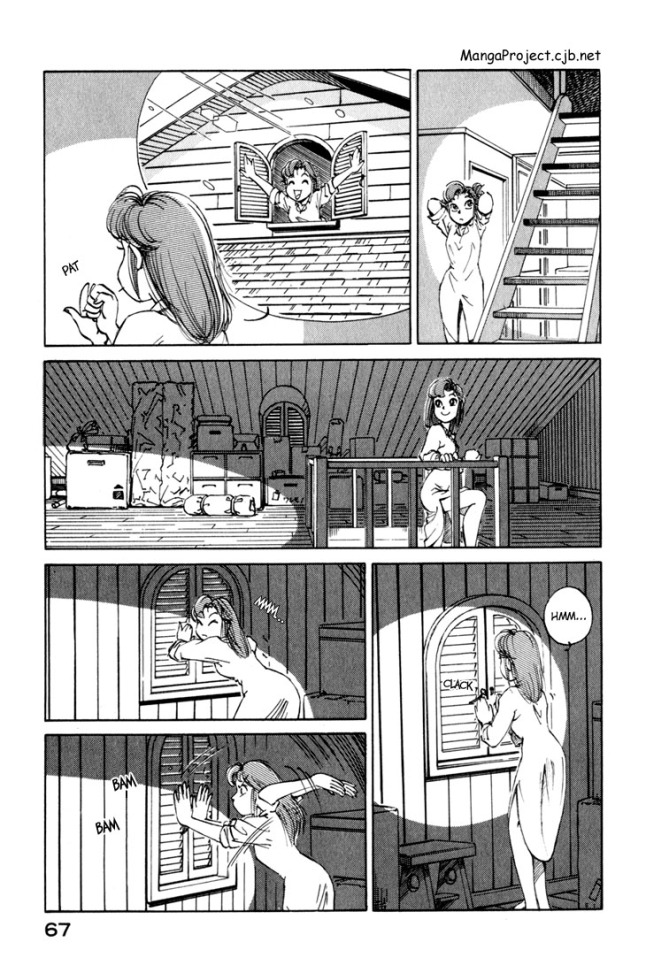 Sure it’s a funny, pleasant, calming, and comfortable series but the premise of it never leaves — you only become increasingly aware of it as time marches forward. This is a manga that is basically about the last days, arguably about the lingering time after the end, so you come to find the little things precious as Alpha does. It’s good, making you have a greater appreciation of living life and all that, but it’s most certainly depressing.

Here, have a chapter that encompasses all of YKK. You might get a glimpse of what I’m talking about:

The first chapter of the series opens up with Alpha holding a gun. 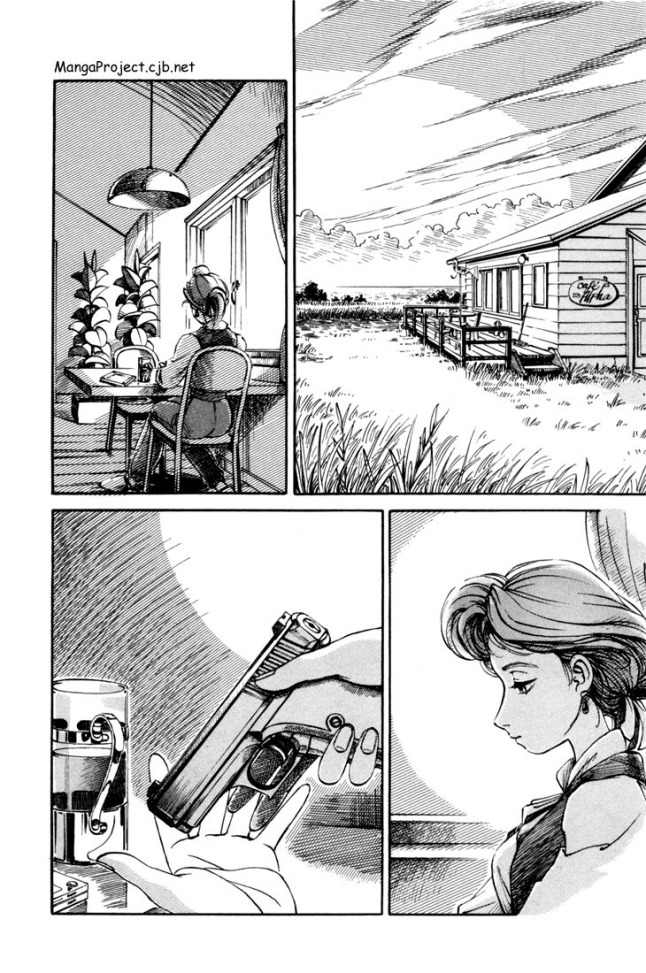 Keep this in mind.

She received it from her Owner/Master/Sensei (one of those titles), a person who is away from home at the beginning of the series. This person gave Alpha a gun to protect herself, since she was being left alone.

Forward another volume, Alpha receives another gift from her Owner.

She gets a camera and uses her handmade gun holster to carry it.

When she plugs it into her mouth, she can “see” through its lens. This is important.

She has perhaps ten “cubes” of…film(?) that can be used for 300 pictures each. It’s simple enough and I expected, given I knew the series had a traveling element, that Alpha would thusly proceed to take lots of pictures of pretty scenery (for which there are many opportunities; the series is gorgeous). I guessed that would be the majority of the chapters.

Aside from her initial test picture, though, and two other impulse-pictures, Alpha doesn’t photograph anything. Even after her first “let’s take pictures!” outing, she finds that she’s not compelled to take anything and she ends the day with only an impulse-picture of her scooter. I was very perplexed by this and couldn’t actually figure out what the issue was. At the very least, it seemed to me that Alpha had at most 3000 pictures she could take, so I couldn’t really imagine her quickly running out unless she started taking photos like mad. She also has an opportunity to take a picture of someone she knows earlier but doesn’t. Judging by the pictures she did take, however, I started to theorize a reason for her reluctance to take photos. Without giving away my thoughts, I will say that Alpha very rarely takes pictures throughout the series, and there is a chapter later on that explains exactly how the camera works. The reveal of those details made something click with me, and I found that I loved this small aspect of the series even more. The camera is really and truly special, both in the context of the setting and in the context of the story’s themes.

You may have noticed another young lady in the preceding pages. This woman is Kokone, another robot. She appears at the end of volume 1 but is officially introduced in volume 2 with a small arc concerning the Owner’s gift. She’s a delivery girl who seems kinda more “stiff” than Alpha, and with her introduction comes a hard-to-ignore shoujo ai/yuri angle. 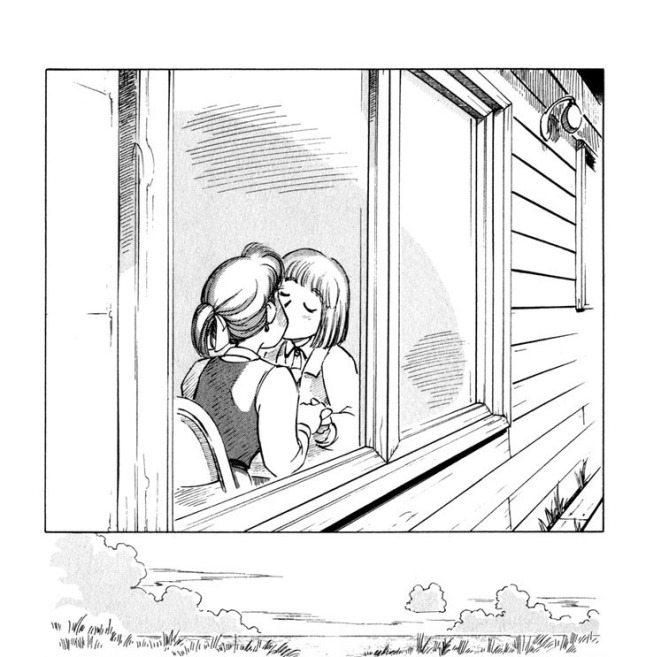 Just delivering a message, nothing to see here.

Although Kokone is matter-of-fact and practical at first, her meeting with Alpha is very important (both for her and the series). Alpha is the first robot Kokone has met that’s so human and Kokone is the first robot Alpha has met, period. Kokone has been told that she’s convincingly human in the past, but Alpha’s behavior is obviously a stark contrast from her (for example, seeing the act of data transfer — done with a kiss — as embarrassing rather than an act done for a plain purpose). The two of them end up becoming best/perhaps more than friends over the course of the series, with Kokone becoming the more fascinated with their partner between the two.

All the characters in the series experience character development, but Kokone’s is the most interesting to me. Thanks to her character arc, I became more certain of what the series was “about”, and what might be the purpose of robots like Alpha and herself. After all, after meeting Alpha Kokone becomes somewhat obsessed with learning more about her “series”, searching all over and eagerly gathering what information she can about herself and her “siblings”. 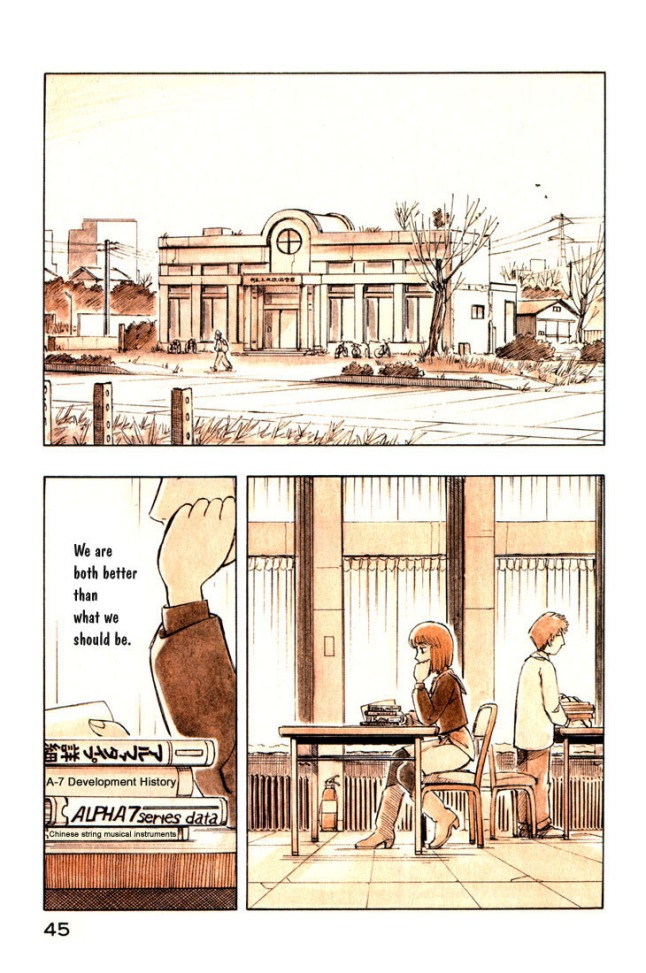 There are many mysterious elements of YKK and a great number of mysteries remain unanswered. Some of it is even arguably supernatural. Although YKK can be called a mystery, most of the answers don’t matter, and only a few of the big questions are so big you’ll probably be trying to figure them out. One of those questions, as I mentioned near the start of this writing, is “why are the robots in this manga so like humans?” They eat, sleep, feel, think — in most respects, they may as well be human. You might already have an answer that you think is “obvious”, but small and crucial details make it easy to doubt whatever conclusions you draw. One character actually was involved in the “research” made toward what would become robots, while another has some things to say about robots’ “composition”, and both can throw a wrench in what theories you come up with. I’d say this is handled well, and at the end I know what I think some answers are. We get many small but important reveals that flesh out this world but also obscure it. For example, there are very few robots in this series; even less than the number of humans. What could that mean? Keep that in mind, I suppose. 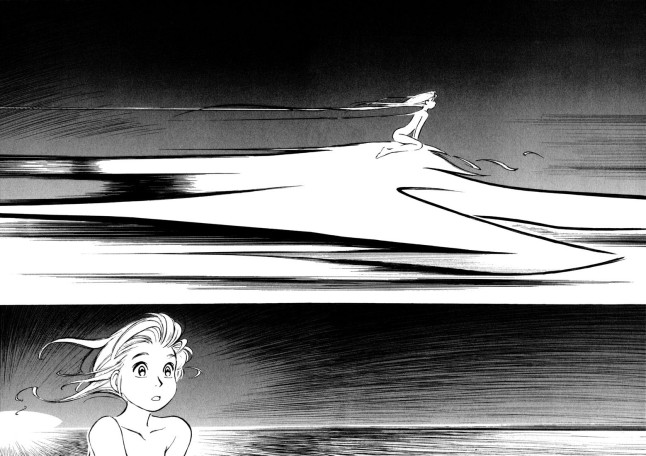 While this mystery is plentiful, in the grand scheme of the manga there isn’t very much of it. Most of this series is slice of life/traveling, and those travels and days are many things but most of all they’re emotional. That is to say, scenes in this manga are brimming with emotion, not that everything is overly sentimental. By not being too emotional, what emotion is there feels more effective (in my opinion, at least). If something sad happens characters aren’t overdramatic, if things are happy they aren’t explosively so, if things are quiet it doesn’t feel pretentious; Ashinano-sensei absolutely killed it with this series on all levels, and it doesn’t feel like a single chapter, page, or panel is wasted. 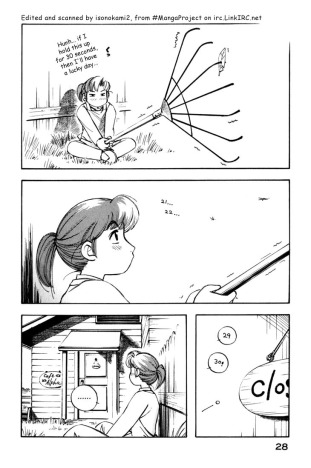 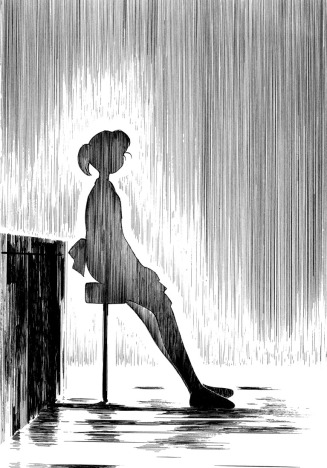 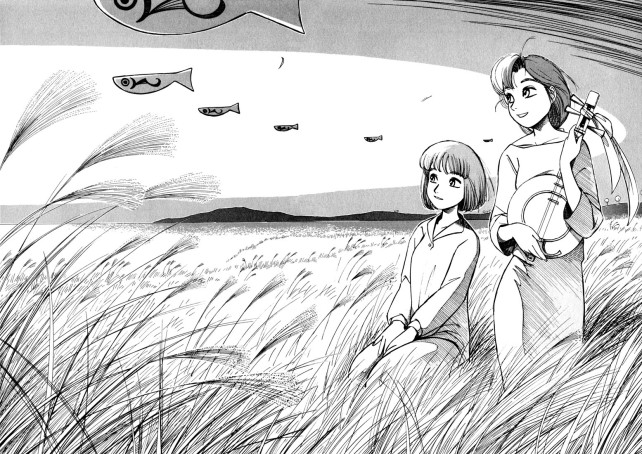 By the way, this series has a bunch of full-color (or largely color) chapters.

It’s quite beautiful and always a welcome change of pace.

Definitely some of the more unique use of color I’ve seen, too.

But after saying that, there’s nothing left to say.

YKK is very good, and people have been saying so for years. I hope that my writing on it convinces someone to see just how good it is as others had convinced me. I’m not sure I’d call it a must-read, because it isn’t always happy and nice and thus can really make you feel bad, but if you’re looking for something assuredly excellent, splendid, and amazing then Yokohama Kaidashi Kikou is an obvious choice. I loved it; highly recommended.

By some cruel and unusual fate, YKK has never left Asia in an official capacity. Its 14 volumes were even rebound into 10 in 2009 (as “shinsouban”), and yet this incredibly critically acclaimed manga never got licensed anywhere else. Huh. The animated OVAs (Original Video Animations), also, never got outside-of-Asia official releases. Oh well, that shouldn’t stop you from buying it! You may do so through honto (guide) (these are the 10 rebound volumes), Bookwalker (guide) (these are the 14 original volumes), ebookjapan (same), or you can look further into the 10 rebound volumes of Yokohama Kaidashi Kikou on goodreads. I bet having all the originals on your shelf would be a point of pride.

That’s all out of me. I am happy you read to the end; thanks. This is the second of the series I’ve reviewed to experience total list domination in the directory (the first was Honto no Kanojo). Well, there will be more reviews to come, later.