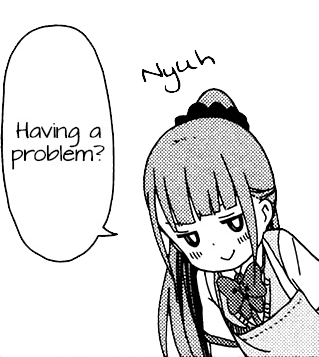 NOTE: Read this article already? Well then, you should check out [this] extension of it I wrote three months after the fact. More thoughts on the series, why it’s superb, and other musings.

Hitoribocchi no OO Seikatsu (ひとりぼっちの○○生活, Hitori Bocchi’s OO Life) is a comedic manga by author Katsuwo (カツヲ) about an incredibly shy middle school girl’s mission to make friends. I like it.

Before we get into why that is, I feel I ought to explain what the deal is with me. According to information I can find from the dashboard of this website, my last and only activity on this “terrenceswiff” blog was a fat two years ago. I declared I’d use this blog as a means to post my stories, but as it turns out, I’m terribly embarrassed about revealing anything not completely finished. And so everything I’ve written has stayed hidden away on my hard drive, shown only to a precious few.

This is shameful behavior. The whole point of setting up this blog was to have my writing publicly scrutinized. So, after frequent pushing from my eldest sister, I’ve decided to convert this blog partly (lol more like entirely) into a review site. Any kind of writing is better than none. Knowing me, though, it will end up mostly being a review site (bingo).

Now my sister, she suggested I review video games, but the honest truth is that while I have played an awful lot of video games in my quarter-century of living I don’t find myself playing so many of them nowadays in comparison to when I was in university and had schoolwork to ignore. On the other hand, something that hasn’t changed with me is how much manga I read. I read a whole lot of manga. I love manga! So while I’m liable to one day review a video game that has absorbed my life and time, I expect I’ll be giving most of my attention to these wonderful comic books from Japan, starting with Hitoribocchi no OO Seikatsu.

As I said at the start of this post, this manga is about a girl trying to make friends. The girl’s name is Hitori Bocchi, which is an entirely unsubtle pun on… “hitoribocchi”, which means “all alone”. Basically every character in this series has a name that’s a pun which describes them succinctly. As evidenced by the comic I opened up with for this review, Bocchi is all alone and friendless.

This wasn’t always the case. While Bocchi is now entering middle school completely friendless, during elementary she had one sole pal by the name of Yawara Kai (“soft and gentle”). After graduating, she and Kai went to different schools, and Kai declared that until Bocchi made friends with the entirety of her new class the two of them would cease their friendship. This was no declaration made out of malice; Bocchi has quite a few problems holding her back from having friends, and Kai is concerned that she’ll never get over them.

Thus, the manga begins with Bocchi vomiting over the girl in front of her because she’s horribly shy.

The girl is neurotic, nervous, nauseous, and weak in the knees. Bocchi essentially roadblocks herself at every pass. Even after making friends with the girl she threw up on, progress with that very friend is stilted by her own nerves. This awkwardness is a big source of the comedy in Hitoribocchi, but there’s a lot more here to entice laughs and smiles from you. Take, for instance, this moron: 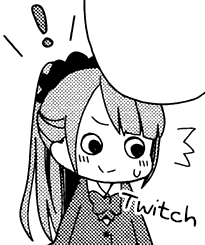 This girl is a treasure. Her name is Honshou Aru, which means “hiding her true nature”. Thus, despite ordinarily being a smiling and (seemingly) competent leader of her class, Aru is, in her own words, “a loser”. She is a forgetful, clumsy, lame loser.

I can safely say among Bocchi’s growing number of friends, Aru remains my favorite. Her subversion of the typical put-together class representative by being a hidden bumbling fool turns the corners of my mouth up every time. Even her position is something of a joke, as despite her best efforts to turn around her loser tendencies in middle school, she is actually only a “vice” class representative.

Aru ends up being Bocchi’s second friend at her new school. Her first, who appropriately takes to calling Bocchi “Vomit” after they first met, is a straight man sort of girl named Sunao Nako (an “honest/gentle girl”) that might easily be mistaken for delinquent. She plays well with Bocchi and Aru, and likes to tease both for some good amusement. Furthermore, if you’re into yuri at all (that is, series about ~lesbian romance~), she also provides some teasing in that respect. 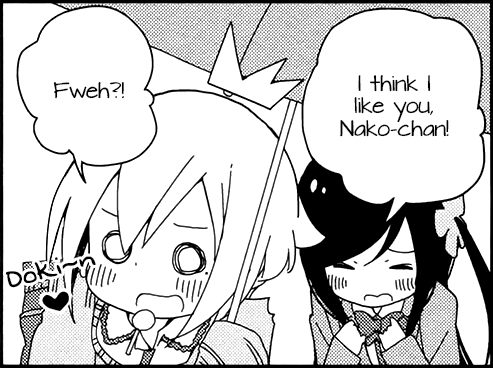 I like that a great deal. Expect to see more.

Though if that’s not your thing, don’t worry about it. This manga is a bit atypical for a “slice of life comedy about girls” in that there isn’t a whole lot of homosexual subtext. Instead, this is very much focused on the laughs. I would say I’m a bit of a stuffy bastard when it comes to manga comedies, turning up my nose at most of them, but I found myself laughing very often with this one. I must say that’s especially noteworthy as this is a “yonkoma” (four panel) manga, a sort of manga that I typically have some aversion to. The four panel strip format is so stiff and rigid it tends to not work for me, but Hitoribocchi succeeds here.

I think what really makes this a winner in my eyes, aside from the rather funny faces often pulled, is how surprisingly relatable it is. While I’m not a hot mess like Bocchi is, her apprehension when approaching new people or simply interacting in the vicinity of strangers is something I definitely recognize from my own youth. It’s amusing in a way some might find the series It’s Not My Fault That I’m Not Popular! amusing, though not near as painful, and with some actual triumph rather than repeated failure (triumph is eventually found in that manga series, see the review). Bocchi may be at a severe disadvantage in the friend-making business due to her own shortcomings, but there’s a strength in her. By the end of the first volume, she’s made three whole friends! That’s lovely.

In the end, I’d say that if you want something funny that’s cute and maybe a little nostalgic in a lightly cringey way, I believe Hitoribocchi no OO Seikatsu is right up your alley. Consider importing the volumes from Japan; the author demonstrated worry about cancellation at the end of the first volume, and now I’m worried too. You can buy the series from Bookwalker, CDJapan, honto, or ebookjapan. Bookwalker is probably the easiest to deal with, since it can be used in English (small guide on how to), it’s digital, and there’s no shipping to consider. Honto is usually considered the better option for physical, but it’s all in Japanese! Check out this guide for getting into it. Ebookjapan offers ebooks. On the plus side that means no shipping costs, but as a “minus” it’s all in Japanese. It should be pretty easy to understand, though; the site is designed well.

Ah, and returning to how relatable this series is, I should say that I can also relate to Aru. Thing is, it’s not just in memories of my youth that I can relate to this girl. She says it best.

I’m told I’m loved for it. And Aru’s friends love her for it. Yes. How nice.

ADDENDUM: Three months after I wrote this article, I wrote [this] extension of it. You should read this, as I explain in greater detail what makes this series excellent.