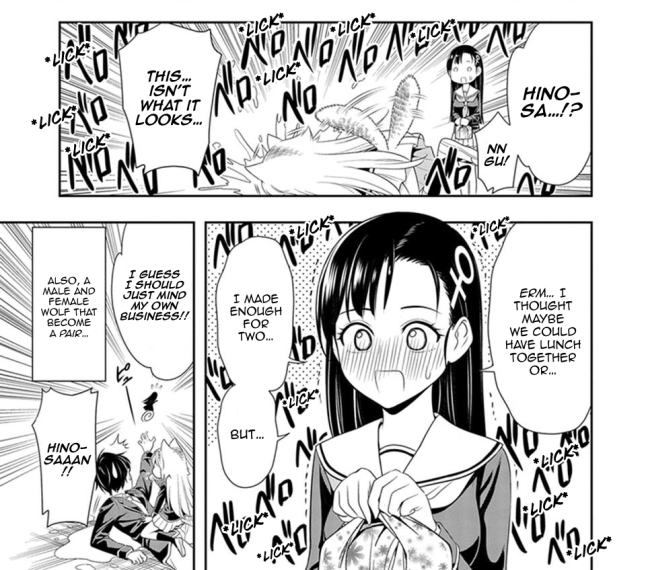 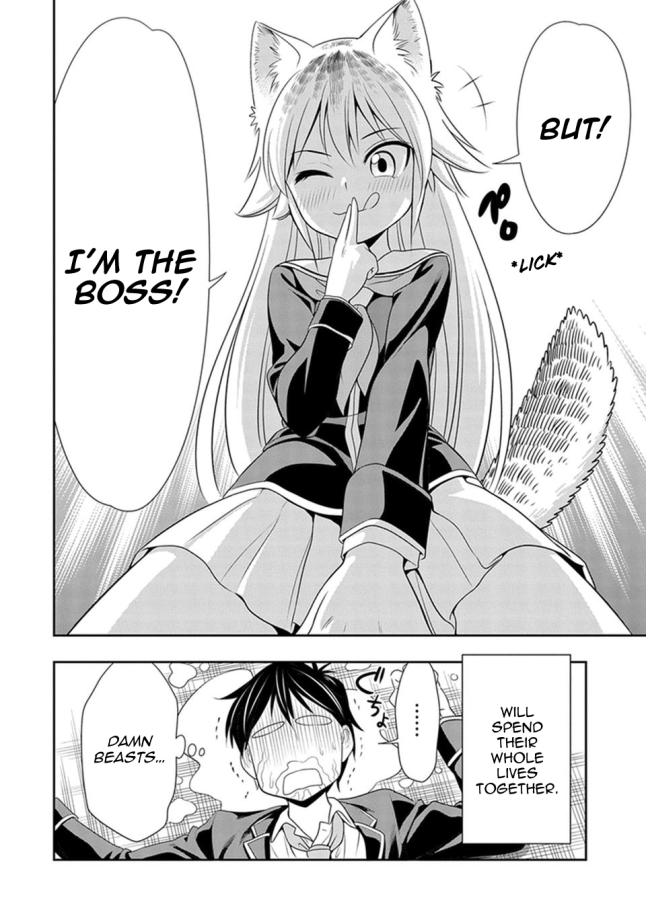 Murenase! Shiiton Gakuen (群れなせ！シートン学園, Come Together! Seton Academy) by Yamashita Bungo (山下文吾) is a comedy/light romance manga about a world (and a specific high school) full of animal-people that our protagonist, a human, loathes. Male “animals” look like their real-world counterparts, just standing upright; female “animals” have 10% furry features. Why? Fanservice. I like this series! And to fit in this “theme week” of sorts, it’s technically a “webcomic” like Unsounded and 4 Cut Hero; it is, however, more traditional than either, basically just being the web equivalent of running in a manga magazine (similar, but not exactly the same as Ura Sunday, for instance). There is, however, a twist. Murenase! runs on Cycomi/Cycomics, where it typically enjoys second place among the publication’s series (at the time of this writing, it’s #1; [here’s] its series page, by the way). The twist is, the whole comic is free, as with any webcomic (I think (I’m really not sure (please don’t hold me to that (it seemed to work that way for me)))). If you want to be able to comment on chapters, though, you can sign up [here], but otherwise just go to Cycomi and proceed to read whatever you like on there. It’s really easy to register, by the way: use Google translate or something for the little you need to know. When you want to log in, find where it says ログイン on the site later (top right). Now, although Murenase! is well regarded on this site (and on the Western Internet, at least to a degree), I wouldn’t say it’s a HIT or anything; Cycomi isn’t a major publication. Also, you can’t buy it. It’s been running for seven months or so and has enough material to fill maybe two volumes, but for some reason? No tankoubon. Weird.
But…yeah! Pretty good comic. It’s full of animal facts and cheeky humor and has a fun cast of characters that is not a harem for the protagonist. That said, it’s technically a love triangle, but it’s weird about that and the main heroine is obvious/destined from the first chapter, so don’t think about it too much. It really is just a fun little comic to pick up and read, so it didn’t surprise me to see it quickly picked up for translation after it had started. You should probably read it, too!

There are actually three other versions of this , [here], [here] and [here].
Premise of this one is real simple. Heck, I already said most of it in the introduction. The protagonist is Mazama Jin, who says he hates animals (he calls them “beasts”), and has his eyes on the only other human in school (a female named Hitomi) because she is human (at least, that’s all he says). He’s one of the strong aspects of the series, because he can be really, genuinely a dick, and his being a dick almost makes him play an occasional “fool” role. He’s not what I’d call a “lovable rogue” or something, he’s just super mean and dismissive toward animals. 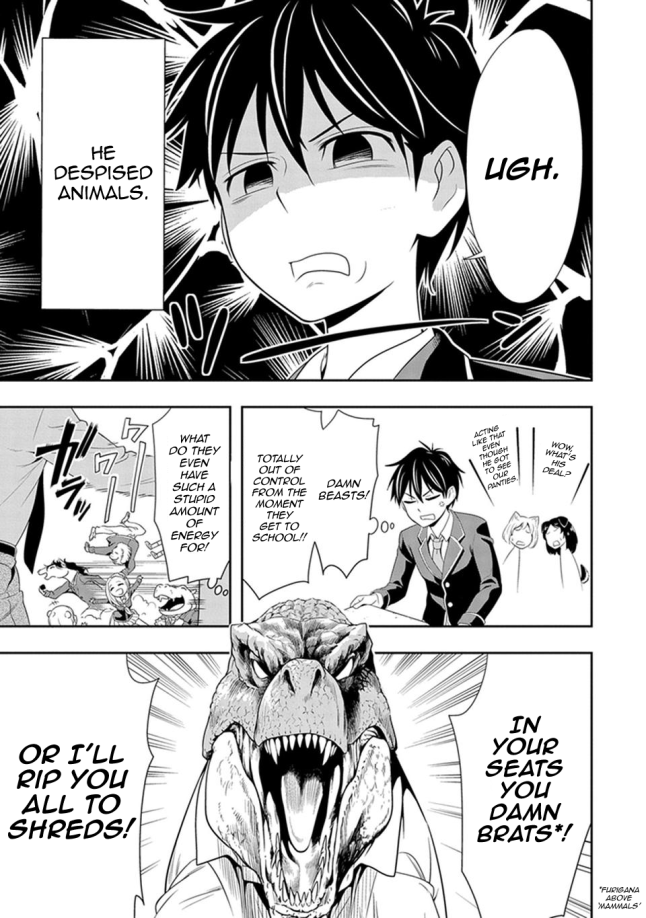 Also the teachers are dinosaurs.
You may have noticed the TL note in the first of these two pages: yeah, pretty much every character has a name that’s incredibly obvious; just the Japanese word for the name of the animal. For example, the main heroine’s surname is “Okami”, meaning “great wolf”. Let’s talk about her next. 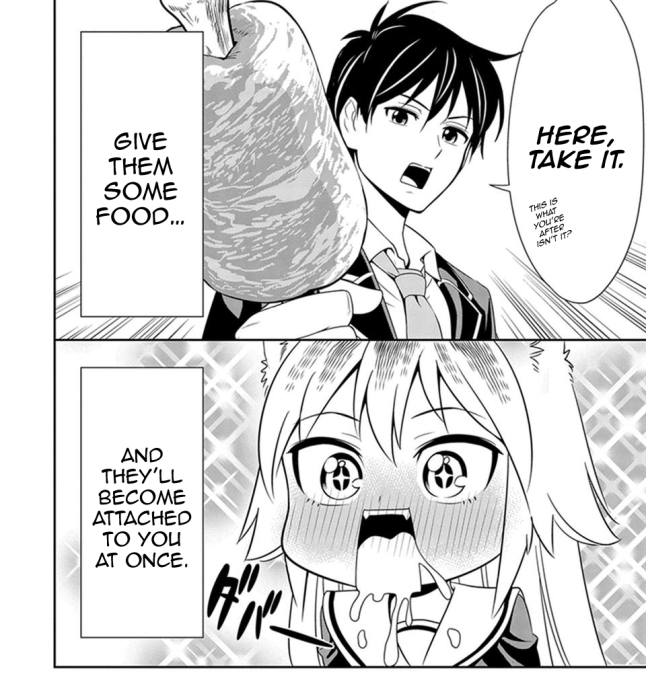 Randomly one day, Jin comes across Okami Lanka in the cafeteria. She’s immediately on guard because animals tend to be when you stumble upon them while they’re eating along, but to get her less tense he gives her his food. This prompts her excitement, and we see that she is TINY. It’s ADORABLE.

Chapter 1 is basically about Lanka, not Jin. Lanka has a dream of making a pack with all kinds of animals, because a mysterious little boy saved her in the past from a group of bears. 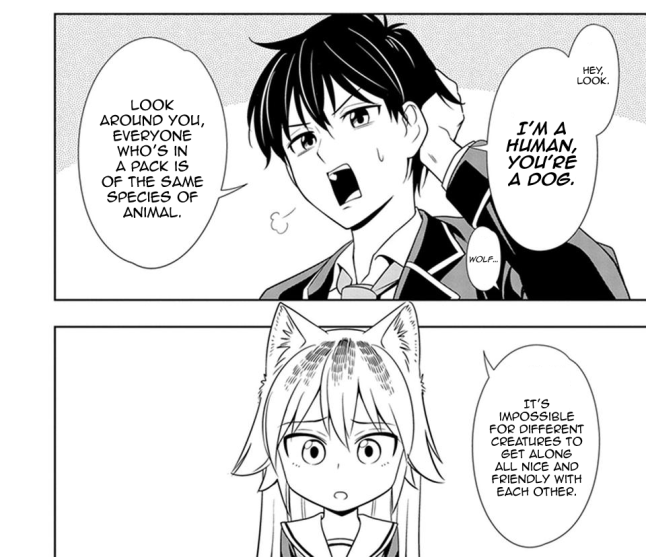 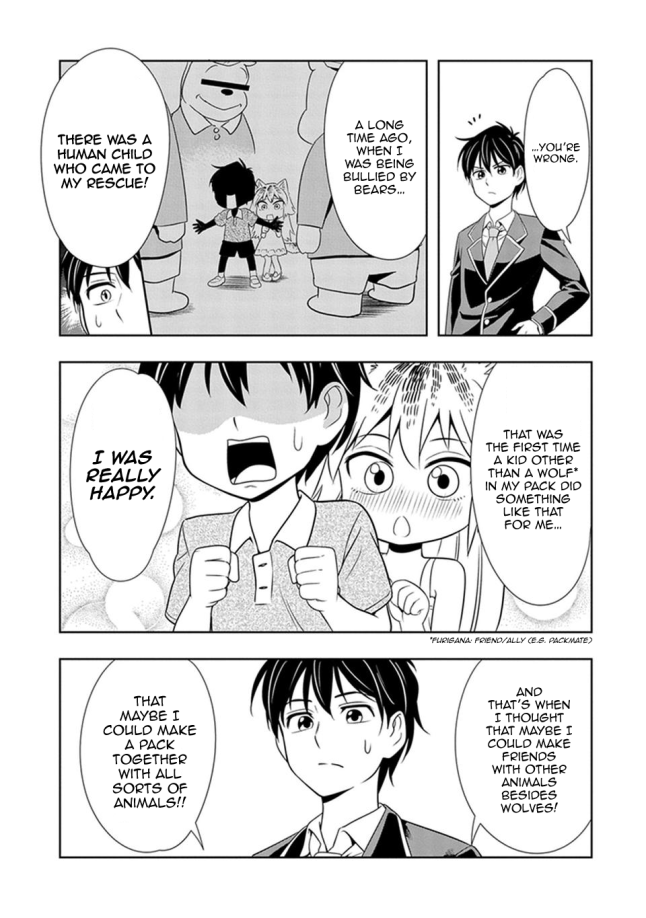 Of course, the boy was Jin. Who else would it be?

After school, Jin finds himself oddly intrigued by the wolf’s proclamations, though he tries to ignore it. Still, he ends up rescuing her a second time from bears after hearing her in trouble that night. It’s not that heroic, but it did earn him some points from me.

After he witnesses Lanka’s conviction and a short battle 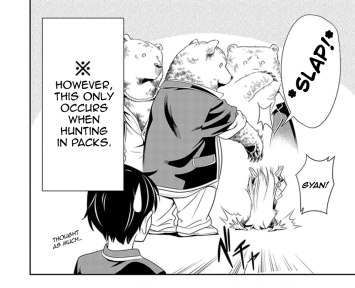 the next day, for whatever reason, Jin decides to join her pack. 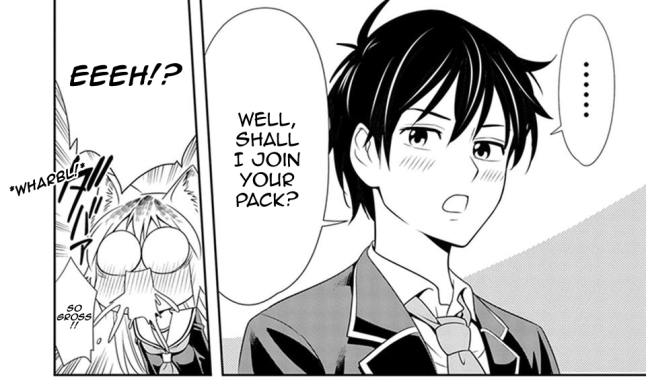 This happens a lot, and not only to Jin.
With chapter 1 over, the rest of the series is about Lanka trying to increase the size of her pack, as well as episodic chapters featuring animals that get specific focus and gags. Jin and Lanka join a cooking club with Hitomi to make this a little easier, and all the while Jin is a big ol’ grouch who insists he hates animals, while simultaneously knowing a great deal about them and helping them often. 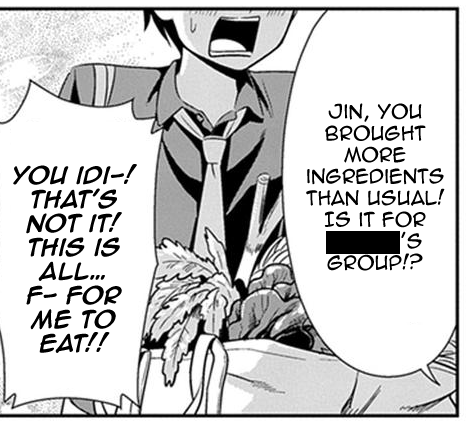 That’s right: Jin is a tsundere. That said, it’s an unusual type, because he does genuinely get annoyed by animals frequently. Anyway, over time we also get a koala

and a cat who join the pack.

They’re all cute, Miyubi (the sloth) is the cutest, and there’s not much more to say! Especially since I don’t really want to give away jokes.

The series pretty much is what it is. If you like what you see, I suggest you go off and read it. I highly recommend it, if only since it seems to be a winner for just about anyone who actually gives it a chance. It’s fun, consistently good (only one chapter was eeeehh (the one where Lanka gets really bossy)), and it’s like watching the Discovery Channel or something — so much animal trivia and jokes based around said trivia. As a reader noted, it should be said that the trivia is not always true, not that that makes it less amusing. 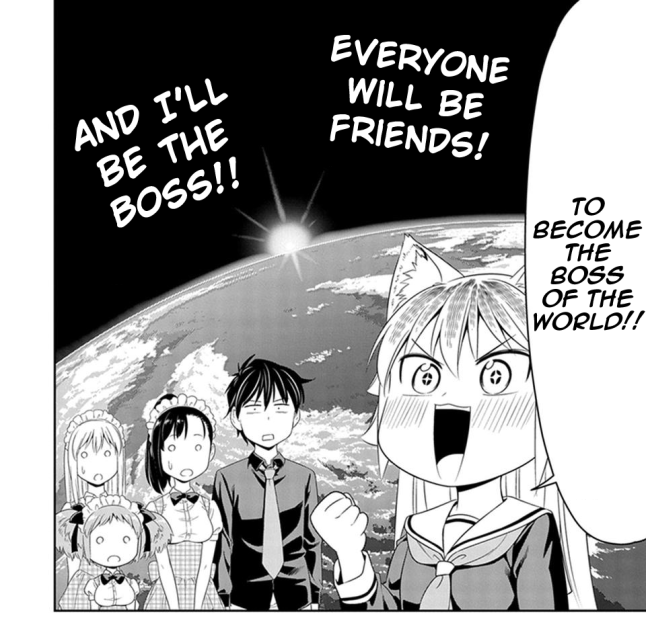 Big Boss would be proud. Man, Lanka is friggin’ great, all the time, always. I like how she drools a bunch but is still mega cute. Maybe that’s my dog-lover bias, but a lot of readers picked this up and continued to read it for her alone. She gets even better during the sports festival arc.

I’ll also say that there are some really good butts in this series. I would like that.

And lastly, I’ll mention that a half serious arc is presently occurring in the manga with nonstandard developments. I don’t believe that the series is ending (it’s a flagship of Cycomi, very young, no tankoubon have been compiled (scratch that, finally got one), and there’s plenty more that can be done with the premise), but it might be changing in somewhat significant ways shortly. Just something to keep in mind (and keep in mind, I was right; it didn’t end). Oh, and while the translation is one of the better ones around (dealing with puns like with Mitsuboshi Colors (not as crazy), and he even translates furigana readings!), I should warn the sensitive Nancy sorts that his credit pages are known to offend those with thin skin. Be careful, I guess!
End of article. Thanks for reading, reader! That’s all, I think? Yep. Told you this one would be short. See you in a few weeks. Also, I may not have ways that you can use to support this series monetarily, but I have some helpful links~
Yamashita Bunko’s twitter
@bungoyama
Murenase! Shiiton Gakuen official site.
Cycomi/Cycomics registration, lets you be able to comment: [link]
The series is biweekly, so released every other week.
Volume 1
CDJapan
Bookwalker (guide)
honto (guide)
ebookjapan
Yamashita Bungo’s ebookjapan author page: [link] | You may be interested in his first series, another RomCom called Kyupiko! ~Fujimatsu Tenshi no Mismanagement~.